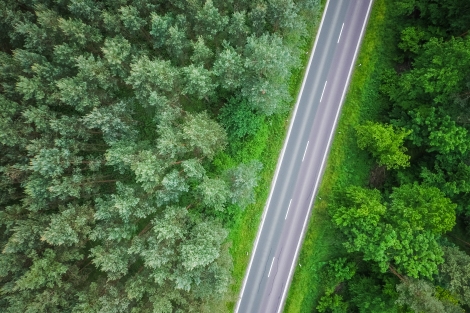 Different sides of the same road. Image from picjumbo.com

Civil society needs to learn how to get big business on side in the fight against policies that curtail activism. In some countries, only multinational companies have the bargaining power to defend the dwindling civic space and safeguard the future development of civil society.

The Charities Aid Foundation (CAF) has published a new report, Beyond Integrity: Exploring the role of business in preserving civil society. It goes without saying I that think that you should read it. The report has been criticised by War On Want as a “tool to whitewash the exploitative nature of many private sector industries” and by the London Mining Network in the Guardian this morning – I defend their right to do so. Hopefully if that right is ever seriously threatened, they would welcome the solidarity of the more enlightened companies in the same way that the activists featured in our case studies did. Hopefully this blog will help iron out any misconceptions about our motivations for this project.

I have written a great deal over the past few years about the closing space for civil society as part of the Future World Giving project. However, the need to address the issue has only intensified during that time.

Measuring this trend is far from easy but some data does exist. For example, CIVICUS reports that the repression of civil society freedom of expression and association occurred in at least 96 countries around the world, with reported killings of roughly 130 human rights defenders during the first 10 months of 2014 alone. The International Center for Not-for-Profit Law (ICNL) calculates that since 2012, more than 90 laws constraining the freedoms of association or assembly have been proposed or enacted.

The causes of this trend are as complex and diverse as its manifestations which include over regulation, barriers to foreign funding, direct legal restrictions on the freedoms of speech and of association and even violent repression of activists. The threat of terrorism, the malign interests of foreign governments, money laundering, corruption and threats to traditional values have all be used by governments to justify regressive policies which undermine the independence of civil society. We could debate the real causes of these trends all day – it’s a debate that I am happy to engage in – but we also need to take action to counter this trend.

Those of us who consider ourselves to be part of civil society can do a number of things. Firstly, we can make the case for how a vibrant civil society does not detract, but actually supports state sovereignty. We can point to the fact that some of the wealthiest and most stable nations thrive under the scrutiny of the most vociferous civil societies. We can also tell the cautionary tales of nations that removed civil society’s pressure gauge and then watched on helplessly as public dissent exploded. Then, as CAF has, we can point to policies which help to improve public trust in civil society organisations (CSOs) through proportionate regulation, ensure the sectors independence and sustainability and promote philanthropy through progressive tax incentives.

Secondly, we can look at our own practices and come together in solidarity to agree on how we might respond to the worsening environment. Happily, this process is underway and a number of initiatives exist to in this area – I encourage you all to reach out to the newly established Funders’ Initiative for Civil Society and to read its first report on how funders can challenge the closing space. However, we have some way to go. Many CSOs and donors see the plight human rights defenders, environmental activists, campaigners for the rights of LGBT people and labour rights artists as being unrelated to their work and solidarity is barely existent across causes. More work should be done to help all civil society actors to recognise these brave activists for what they are; the canaries in the civil society coal mine warning of rising toxicity in the environment.

Thirdly, and crucially, we need to face up to the fact that some governments will not listen to us, but they will listen to the private sector. In an increasingly globalised economy, governments are competing with one another to attract business and investment. It is no coincidence that the average global corporation tax rate, according to KPMG, has fallen from 27.5% in 2007 to 23.7% in 2015.  But not all of the assumptions made by governments about what policies are attractive to companies are sound. Companies often favour stability and value public scrutiny in all its forms where it is able to bolster the governance environment. As such, the idea that the silencing of activists makes for a more attractive investment climate is for most businesses, erroneous. Whilst some companies undoubtedly turn a blind eye to or even encourage policies which repress dissent, the most enlightened amongst them are potentially valuable partners in defending civic space.

Whilst most corporate leaders do not see it as their role to engage in politics, they feel a responsibility to inform government when policies are likely to damage business interests or interfere with their corporate values. Understanding that civil society can help to expose corruption, uphold the rule of law and provide a pressure gauge for the controlled and constructive release of public unrest, some companies are choosing to stand with civil society against repressive policies that would undermine the sustainability of business.

Knowing this to be true from our engagement with the private sector globally as advisors of philanthropy and providers of services for donors, we decided to look for examples of multinational companies choosing to side with civil society against government attacks on civic rights. The research, commissioned by CAF and carried out by the London School of Economics and Political Science, identified four remarkable case studies and interviewed key protagonists from the businesses (such as Primark, Inditex, C&A, Puma, Tiffany & Co, Leber Jewellers Inc. and New Look) and CSOs (such as Amnesty International, Oxfam, Business & Human Rights Resource Centre, Human Rights Watch, Finnwatch, International Service for human Rights and Labour Behind the Label) involved.

The subsequent report, Beyond Integrity: Exploring the role of business in preserving civil society, finds that companies should – and in some cases already are – actively defending civil society against attempts by governments to undermine it. It also makes a strong business case for doing so.

The report recommends that companies consider the business case for defending civil society, focus on developing and leveraging their wider networks to bring about collective action and ensure that project experience feeds into the development of commitments in this area. But what does civil society need to do to help engage companies in issues that they may not naturally feel comfortable acting on?

Gaining the protection of powerful friends

We need to understand the position of companies in their relative market and specifically in the country context in which they operate. Focussing on industry leaders can be highly impactful, but will often mean private influencing rather than public campaigning. Developing a relationship with such companies can allow for the leveraging of their huge bargaining power in discussions with government. This may not make claiming credit easy but if outcomes for the sector are the priority, this should perhaps be a secondary concern anyway (cue the mandatory debate about impact measurement).

One of the most striking things that I learned from our research was the extent to which some companies are driven by their ethical values. Where public commitments have been made, this is likely an indicator that the company already has access to wider networks of influencers meaning that they can scale an agenda very quickly. Of particular focus at the start of any campaign should be companies that not only have a strong ethical position, but are also privately owned. In challenging the conviction of Rafael Marques in Angola for instance, Brian Leber of Leber Jewellers Inc. was able to act as a convener for other companies and as such, was instrumental in brining about collective action.

Finally, it is clear from our research that some industries are innately more likely to be responsive to call from civil society to act on ethical issues. In particular, consumer facing industries are likely to be responsive due to the fact that their brand can be tarnished or bolstered depending on their response. However, civil society needs to be aware of both brand associations and the complexity of companies varying operating liabilities in ensuring that their tone encourages, rather than alienates potential partners.

Have comments on these findings? Disagree with something I have said? Great! … okay maybe not great but I do want to hear your thoughts so please comment below or reach out to me. Before you do anything though, download the report.

2 responses to “Beyond Integrity: why civil society needs to engage business in defending civic space”

We have moved to the Giving Thought think-tank on CAFonline

We are talking about