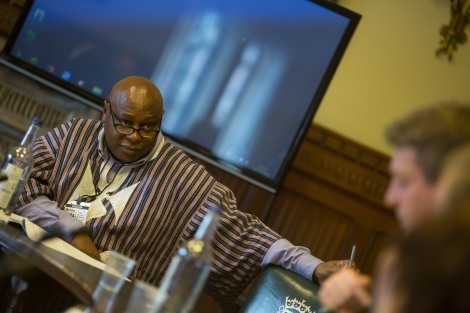 Maina Kiai at a Parliamentary Roundtable arranged by CAF

In 2013, Maina Kiai, the UN Special Rapporteur on the rights to freedom of peaceful assembly and of association, visited the UK to assess the way that the Government protects these freedoms, and to ensure that they are not being unjustly restricted. His initial report, though largely positive, contained criticism of government policies, and a series of proposals put forward to ensure the UK’s compliance with international human rights standards.

Last week, Mr Kiai conducted a follow-up visit to assess progress and investigate developments since his initial visit. The fact that Mr Kiai chose to return to the UK is in itself somewhat concerning, as this is the first follow-up mission that he has conducted. As part of his visit, Mr Kiai took part in a roundtable in Parliament hosted by the Charities Aid Foundation (CAF), which featured a discussion on treatment of civil society organisations in the UK.

The event took place under the Chatham House Rule, meaning that comments cannot be attributed to speakers. However, a number of interesting themes did emerge that we will briefly explore, before looking at Mr Kiai’s conclusions at the end of his visit.

First of all, it is important to explain the international perspective that underpins this topic. Policies introduced in the UK do not exist in a vacuum and can often impact on politics in other states. The UK’s proud history and reputation of facilitating a strong civil society means it has a responsibility to project a positive, enabling relationship between government and civil society. This can ensure that nations which look to the UK as an example can emulate its enabling and tolerant environment for civil society. However, where the UK is perceived to be undertaking restrictive or regressive action the effect can be reversed. It is, therefore, concerning that the UK has been singled out as one of the ‘old democracies’ with a particularly worrying recent track record, and is seen to at risk of further contagion as this could vindicate the approaches of governments in other nations and amplify an already worrying trend for a closing of civil space.

One explanation offered at the roundtable for the emergence this negative climate is that the previous Coalition Government was not comfortable with the criticism that they received from CSOs, who (it is suggested) did not understand the need for austerity economics. On top of this, government saw, or at least perceived, a refusal from the sector to engage on initiatives such as the Big Society. The cumulative effect of this was to encourage leading ministers to fight back against civil society organisations, and this has manifested itself in the introduction of a number of policies that are viewed negatively by civil society organisations.

The relationship between charities and government has been characterised by mixed messaging, challenges posed by vague language in the drafting of policies, and a climate characterised by rhetoric that is often simultaneously negative and positive. This has been illustrated by debates around advocacy and campaigning, where it’s fair to say that many charities feel the words of government are far removed from their deeds, and the policies introduced. This is exacerbated further when policies are introduced without the opportunity for either Parliamentary scrutiny or the chance for charities to feed into the process, as evidenced by the introduction of the anti-advocacy clause.

One of the reasons that civil society organisations have been unable to effectively challenge and prevent the introduction of regressive policies affecting the sector, it was suggested, was the development of a ‘silent service delivery sector,’ which means that CSOs, increasingly reliant on and embedded within the framework of government, are unable to effectively separate from the symbiotic relationship to offer a reasoned and emotive critique.

All of this takes place against a backdrop of issues of trust in civil society organisations, with Edelman’s Trust Barometer finding a fall in trust in UK-based NGOs. That isn’t to say that the approach across the UK is homogenous; indeed, it was noted that the Scottish government and regulator (OCSR) have taken a significantly different approach for engagement with civil society organisations, which appears to have led to constructive and supportive dialogue.

A number of ideas to help protect civil society and alleviate concerns emerged. Firstly, it was suggested that charities would benefit from greater guidance and clarity about the kind of advocacy that they can undertake, with the water somewhat muddied by recent developments. This, however, might prove to be troublesome in its own right if it results in a reduction of the freedoms granted to charities under CC9, the Charity Commission’s guidance on campaigning.

The Government should also be more consistent and utilise positive rhetoric, it was proposed; ‘Greening, not Grayling,’ referencing the differences in language used by two members of the Cabinet (Justine Greening MP as opposed to Chris Graylin MP). The UK could also learn from the actions of other countries elsewhere, with the Dutch government explicitly providing support to advocacy partnerships, recognising their value. Government should ensure that laws and practices are aligned with international standards, something that the Special Rapporteur may consider in his report. Finally, charities should be encouraged to embrace transparency principles, but should also ensure that the division of advocacy and service provision does not continue – government, donors and regulators should be encouraged to consider the totality of what civil society organisations do, rather than segregate what they perceive to be ‘good’ and ‘bad.’

Mr Kiai will be producing a detailed report on his visit in 2017. He did, however, make a statement at the conclusion of his visit that touched upon the themes he will seek to explore in more detail. The initial assessment is extremely worrying for civil society organisations in the UK, with Mr Kiai stating that:

“My impression at the conclusion of this visit is that a series of separate measures by the Government, some implemented and others proposed, are resulting in the closing of space for civil society. I am concerned that, put together, these measures suggest that Government has a negative view of civil society as a critical partner that can and should hold Government accountable.”

To coincide with Mr Kiai’s visit, CAF published a report on the different measures that have restricted the advocacy function of charities in recent years. In the report; Do As I Say, Not As I Do; UK policy and the global closing space for civil society,  we argue that not only do regressive policies towards civil society organisations weaken democracy, but that there is a subsequent impact on the UK’s global reputation. This can be manifested both as a weakening of the UK’s influence and by other countries using policies enacted in the UK as justification for the introduction of regressive measures.

“The UK is regarded as a model in democracy and human rights, and actively works at the UN Human Rights Council to support efforts for broader enabling environments for civil society. It is imperative that the same standards that the UK calls for internationally on civil society space are implemented domestically.”

We have moved to the Giving Thought think-tank on CAFonline

We are talking about